Peking University, December 22, 2020: The emergence of two-dimensional (2D) materials provides an excellent platform for exploring and modulating exotic physical properties in the 2D limit, and has driven the development of modern condensed matter physics and nanoelectronic devices. Among various exotic physical properties, 2D magnetism is one of the most important topics, which shows potential application in spintronics. In recent years, researchers have discovered a series of intrinsic 2D magnetic materials, such as CrI3, Fe3GeTe2, etc. However, most of the yet discovered 2D magnetic materials are instable in atmosphere, which limits further investigation and the application of 2D magnetism. Therefore, the key issue is how to induce magnetism in air-stable 2D materials.

PtSe2 flakes with thicknesses of 8-70 nm were grown by chemical vapor deposition (CVD), and their high crystalline quality was confirmed by transmission electron microscopy and selected area electron diffraction. The researchers further fabricated PtSe2 devices of different thicknesses and studied their electrical transport properties. The longitudinal resistance decreases with the decrease of temperature in high temperature regime, which is typical metallic behavior. Interestingly, on further decreasing the temperature, the longitudinal resistance increases logarithmically and then tends to saturate at ultralow temperatures. At low temperatures, isotropic negative magnetoresistance (NMR) is detected when an in-plane magnetic field is applied. Further analysis shows that the logarithmic increase of the longitudinal resistance with the decrease of temperature and the isotropic NMR originate from Kondo effect. The well-known Kondo effect usually arises in a non-magnetic metal doped with magnetic impurities, resulting from the exchange interaction between the spins of conduction electrons of non-magnetic host and magnetic impurities. However, the characterization results have demonstrated that there are no magnetic elements in PtSe2 flakes. 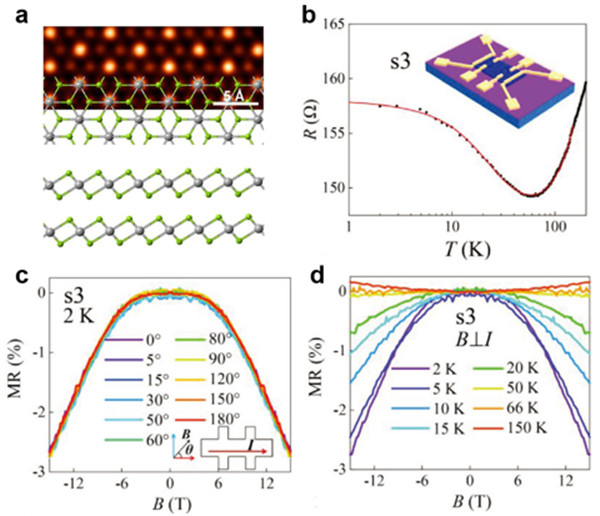 Figure 1. The atomic structure and transport properties of PtSe2 flakes. (a) Atomic-resolution high-angle annular dark-field scanning transmission electron microscopy (HAADF-STEM) image of a few-layer PtSe2 flake showing its 1T phase feature and A–A stacking configuration. (b) Longitudinal resistance of s3 as a function of temperature in log plot from 200 K to 2 K. (c) Isotropic NMR when the magnetic field is applied in ab plane of PtSe2 flake s3. Inset shows the schematic diagram of magnetotransport measurements. θ labels the angle between magnetic field and current. (d) MR at various temperatures when the magnetic field is perpendicular to the current in s3.

Figure 2. Theoretical interpretation for the local magnetic moment in PtSe2 flakes. (a) An illustration of the local magnetic moments (denoted by red arrows) and a Pt-vacancy defect (the blue circle) placed in the topmost layer. (b) Electronic density of states of the p orbitals of the three neighboring selenium atoms of the Pt-vacancy. (c) The energy of different magnetic configurations (labeled by the angle β between the magnetic-moment direction and the z axis), where the energy zero corresponds to the magnetic configuration with out-of-plane magnetic moment (i.e., β = 0).