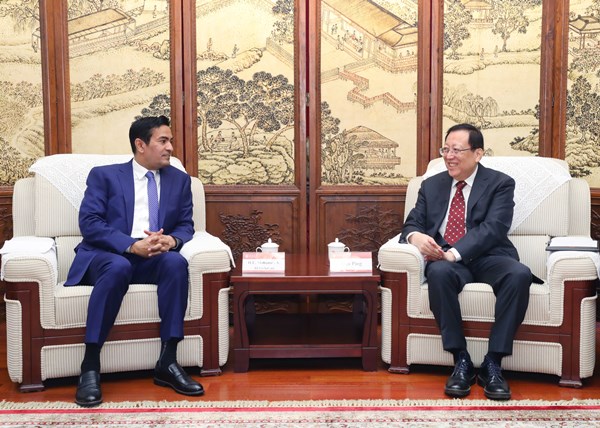 Hao extended warm welcome to Al-Dehaimi for his visit to Peking University. Hao said Peking University has been taking seriously exchanges with Arab countries in culture, education and research. In recent years, PKU and Qatari higher education institutions have strengthened collaboration in people-to-people exchanges and public health, and have come to fruition. He expressed hopes to further expand cooperation between China and Qatar to yield more fruitful results in education and culture. Meanwhile, Hao also showed gratitude towards the support from the Embassy of Qatar in China and Ambassador Al-Dehaimi, and stressed that Peking University will support and take an active part as always in educational and cultural activities hosted by the Embassy of Qatar in China.

Al-Dehaimi expressed his appreciation for the warm reception and noted the profound history and culture of Peking University. Al-Dehaimi said he hopes to maintain friendly cooperation with Peking University and explore more platforms for bilateral exchanges. The Embassy of Qatar in China is keen to serve as a bridge, advancing people-to-people exchanges between the two nations. Qatar will host the 2022 FIFA World Cup. Al-Dehaimi also wishes to take this opportunity to introduce Qatari culture to more Chinese youngsters, because the exchanges among young people can be an important way to strengthen bilateral exchanges between the two countries.

Edited by:
Fan Xueyuan
Latest
YOU MAY ALSO LIKE