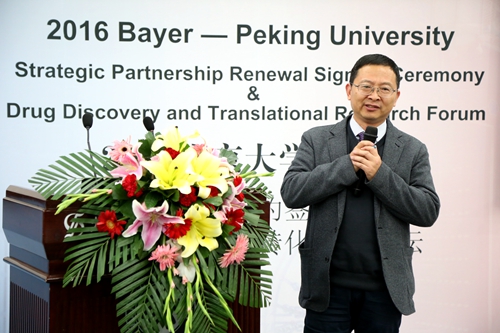 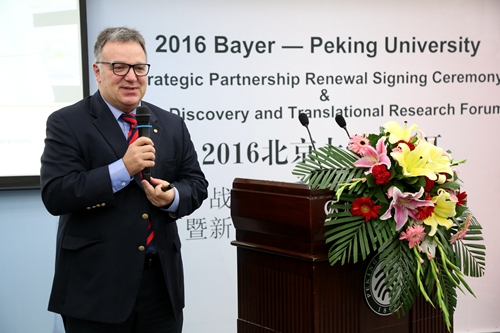 Ten researchers from the School of Life Sciences, College of Chemistry and Molecular Engineering, Institute of Molecular Medicine, College of Engineering and Shenzhen Graduate School of Chemical Biology and Biotechnology, Peking University signed 13 research cooperation agreements with Bayer Healthcare Co., Ltd. from 2014 to 2016. The contracted amount is 1.6 times the amount of the original budget. Bayer HealthCare also sponsored the "Bayer Chair Professor" and "Bayer Scholars Award" to encourage and recognize outstanding scholars in Peking University who have made remarkable contributions to the life sciences and drug research and development. At this meeting, “Bayer Chair Professor” went to Research Fellow Gao Ning from the School of Life Sciences while other 17 people from different schools won the “Bayer Scholar Awards”. 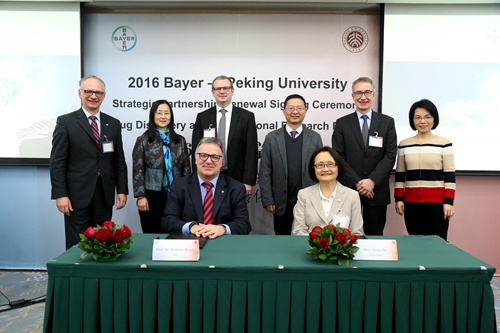 Given the good results of 2014-2016 Bayer-Peking University project, the two sides decided to continue the partnership and signed a three-year (2017-2019) phase II comprehensive strategic partnership agreement, the contracted amount of which increases from 10 million yuan in phase I to 21 million yuan. The agreement adds support for post-doctoral projects as well.

The Peking University-Bayer Healthcare New Drug Development and Transformation Research Center provides a platform for scientists from Peking University and Bayer Global Drug Discovery. This open and innovative model of cooperation between universities and the industry blends the academic creativity of Peking University with the experience of Bayer HealthCare in the development of new drugs, which in turn will accelerate the process of new drug research and development, and eventually improve human health.